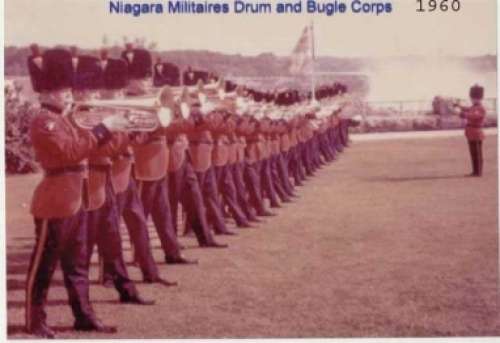 Niagara Memorial Militaires Drum and Bugle Corps NIAGARA MEMORIAL BAND – NIAGARA MEMORIAL MILITAIRES A BRIEF HISTORY The Niagara Memorial Band was founded in late 1948. It came about when a group of Ex Sea Cadets in Niagara Falls had ‘’aged out’’ of the Cadet Program but wanted to continue their Marching Band experience so decided to start their own organization. Lt. Cmdr. James Davies, Royal Canadian Navy Ret. was the original Bandmaster and Director. He was also the drafting teacher at N.F.C.V.I. at the time. Since the group had neither funds nor instruments, a plan was put in place to attempt to outfit some 40 Bandsmen.

As this was post World War 2 time it was decided by this group of ‘’teenagers’’ to form the Band as a Living Memorial to the fallen Servicepersons from the Niagara area. With the support and help of the Silver Cross Mothers of the day, the group approached the community for support by way of public donations. The program was a success and within two months the Band had a complement of brass bugles, rope tensioned snare drums and a glockenspiel.

Each instrument had one or more brass plaques attached bearing the name of a fallen serviceperson from the Niagara Area. Uniforms were the next project to undertake. The group wanted to retain its attachment to the Navy but were unable to acquire Naval uniforms. The members visited Jack’s Army Navy War Surplus store then located on Queen St, in Niagara Falls and each member purchased a Canadian Army tunic and dyed them black to resemble Navy attire. Army web belts and gaiters were dyed white with white liquid shoe polish.

This writer has not been able to determine the source of the acquired Navy hats. The Band was now outfitted with a striking uniform that soon became an identifying ‘’trade mark’’ of the Niagara Memorial Band. Weekly practices began taking place at Simcoe St. school grounds, and often attended by 100s of city residents. ‘’ Route Marches’’, always in different parts of the City, were common occurrences and the citizens applauded from their porches and along City sidewalks as the Band marched down local streets.

The Band became deeply involved in the Community, participating in many celebrations and parades without any thought of financial gain.

The Band also became a favourite of the American Legion and Fire Departments in Western New York etc. bussing out every summer weekend to New York or Pennsylvania States for parades and Military Memorial Services. In late 1950, with the outbreak of the Korean War, sixteen Band members left the Band in a group and joined the Canadian Navy. Many still in their teens.

Around 1953 – 1954, the Band began to compete against many Drum Corps from the U. S. for Parade Prize money. It became obvious that the Band needed to acquire updated instruments in order to be competitive. Funds were raised by selling Christmas Trees, Turkeys, Tag Days, and winning many first place prizes to purchase new instruments and uniforms of Scarlet Tunics and fur Busbys. This new appearance of the Memorial Band literally ‘’shocked’’ the Band’s competition both in Ontario and the U.S. communities that we had frequented for the past number of years in Naval Attire.

Around 1959, the name of the Band was changed to "The Niagara Memorial Militaires Drum Corps" and operated under that name until it disbanded in 1964, but not until it achieved the distinction of being one of the top three Drum Corps in Canada.

In February of 2006, under the leadership of Founder Ron Jones the Corps reorganized as the Niagara Memorial Militaires Alumni Drum Corps.

The Corps has become active in local celebrations, parades, and Veteran Memorial services participating in such events as Canada Day Parade, Christmas Parades, Park Dedications, Legion Memorial Services etc. throughout the Region of Niagara. The Corps is an ‘’all age’’ precision marching Drum and Bugle Corps including our Colour Guard and is available for participation in community celebratory events.

Anyone can become a member:

Membership is open to persons 18 years of age and up. Those under 18 are encouraged to enquire regarding junior membership with special conditions to apply.

Some drum corps/marching band experience or musical experience in brass, percussion or keyboards is desireable but we are willing to train and have the tools to do so.

We offer positions in trumpet, drum and glockenspiel sections as well as flag, rifle and lance bearers.

Experiencing the exciting world of Drum Corps performance is a feeling that never subsides.